But as a fact Panthers were fitted out with infrared observing equipment.

One of these devices can be seen in Koblenz, Germany, at the Wehrtechnische Studiensammlung (Defense Technical Study Collection) for example.

Initial tests using infrared equipment on the Panthers were conducted in the late period of 1943.
Panther tanks were sent to Fallingbostel to the Panzerschule to have the FG 1250 tested. 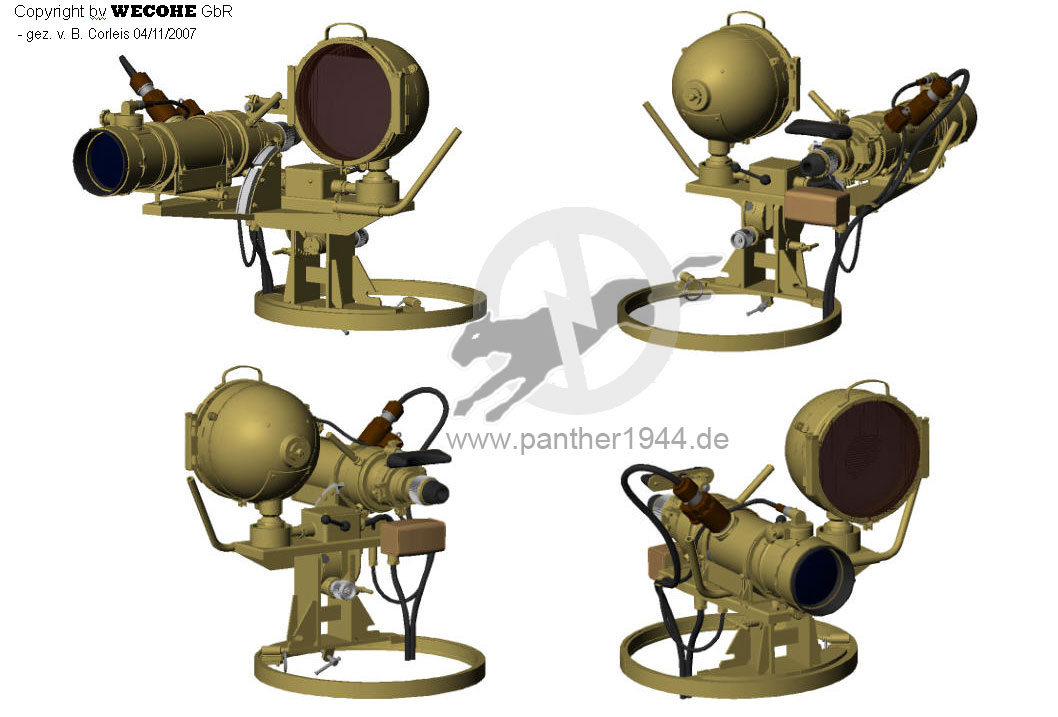 It consisted of a searchlight and an infrared image converter (Bildwandler=BiWa), the combination had the designation FG 1250 (Fahrgerät 1250) - German code name "Puma".

There was a small platform mounted in the 12 o'clock position inside the commanders cupola. The IR device was mounted on the turret position indicator within the commanders cupola and could therefore be rotated 360 degrees . A 20cm spotlight (200W) was mounted on the indicator and a BiWa was installed. The power supply was ensured by an additional 12-volt battery, which was fed from a transformer. The charging of the battery was carried out by a generator. For the installation of both devices, the ammunition bin was dropped at the back right fighting compartment. Furthermore the right rear storage box was replaced and an armoured stow box for the device was mounted. The commander directed the driver and gunner using the IR device. Overall, a very primative method, which required a lot of training. The effective range of the system was about 500-600 meters. Of course this diminished the range of the excellent 7.5-cm-KwK L/70. Because of this, the Panthers were supported in target reconnaissance with "UHU" (owl) - equipment, a 60-cm-IR light (converted from anti-aircraft searchlights) on Sd.Kfz. 251 (Sd.Kfz. 251/20). Apparently the 3. Kompanie 1./Pz.Rgt. 24 with the A solution was sent to Bergen for training. Reported hits have been achieved up to distances of 2500 meters!
At the beginning of 1945 a panther with SPERBER device should have been sent to the front at Stuhlweissenburg. Mostlikely it has been deployed in combination with an "UHU" on Sd.Kfz. 251. These vehicles were accompanied by so-called "FALKE" devices. These were IFV (Sd.Kfz. 251) equipped with an IR device for the driver to ensure their night-fighting capability. The use of combined arms has, according to reports in this context, works very well.
The 3. Kompanie was then ordered to Hungary under the battalion without infrared equipment! The reason why the equipment had to remain in Fallingbostel, is not known.

Also at the beginning of 1945, the Panzer Division "Clausewitz" fought in the area of Fallersleben. Reputedly 2 Panthers been equipped with the "SPERBER" device and on April, 21 at 02:00 o’clock two AT-guns were knocked out by the Panthers. The story seems doubtful and newer sources affirm this combat but without IR-equipment. Above all “Clausewitz” never had IR-equipment officially.

On February 12th 1945 the 1. Kp / PzAbtl 101 from Führer-Grenadier-Division was ordered by the “Generalinspekteur der Panzertruppen“ to carry out experiments with the F.G. 1250. Daimler-Benz was instructed to send an engineer team to Altengrabow to mount F.G. 1250 on ten Panthers there. In addition, the Company got 3 Sd.Kfz. 251/20 "UHU" assigned. Reports from officers of the company, give evidence of successful deployment of the devices without technical problems.

From the production at MNH it is known that in August 1944 the Panthers should be equipped with the F.G. 1250 already ex works. Due to delays in delivery with the Fahrgerät only 20 Panthers could be fitted out by October 1944. In November 1944 OKH issued an order stating that all panthers that had been fitted with the IR devices up to that point should have them removed and be converted back to standard Ausf G panthers.

Thomas L. Jentz names in his book „Germany’s Panther Tank – The Quest for Combat Supremacy“ following units to whom Panthers with F.G. 1250 were assigned

All units, except the „Ausbildungs-Lehrgang Fallingbostel“ were deployed at the eastern front.

The Panther Ausf. F finally was designed to be fitted out with the F.G. 1250 from the beginning.

Panthers Ausf. D and early Ausf. A should be equipped with 3 IR-sights (commander, gunner, driver).
This has proved to be a fake based on a single picture and the variant B has never been existent.

As stated at the beginning: Information about the use of IR devices in the Wehrmacht is very limited and the data is contradictory in some cases substantially!

If someone can give us further information, the article will certainly be updated! Simply mail us !

In the context of infrared equipment the Orterkompass is also likely to see.

It is still to note that the mounting of the IR equipment storage box does not allow suggesting if the tank was fitted out with the IR device or not.  Rather, there are always more pictures of Panthers coming to light, which had mounted the box, but not the rest of the equipment.

Although seemingly very few devices were delivered to troops at the front, the training on IR-Panther on the home training areas ran apparently in fairly large scale

… With the reconstitution in Grafenwoehr, the “Abteilung” received Panthers with the new infrared targeting and monitoring device for the commander with a range of 400 m. In conjunction with infrared searchlights, the “Abteilung” should be night-fighting capable - for that time an shocking technical progress. In the field trials this stood out, consequently with so many mistakes on the devices these were withdrawn prior to the disengagement of the “Abteilung” again…

Most likely it has been